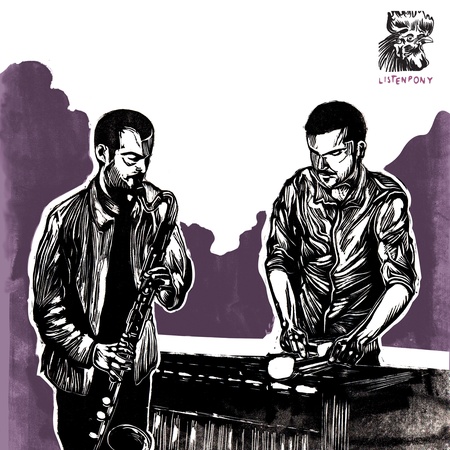 NAS duo, a percussion and clarinet duo with a focus on new music, collaboration and innovative programming, perform new commissions by Freya Waley-Cohen, Elischa Kaminer and Ivan Vukosavljević alongside their own arrangement of Bach’s Invention no. 8. Tracks recorded live at Listenpony, London, February 2017.

NAS duo is formed of percussionist David Merseguer Royo and clarinetist Ausiàs Garrigós Morant. Since coming together in 2008 they have become Park Lane Group Artists and performed at Wigmore Hall, St Martin’s in the Fields, St John’s Smith Square, and been featured by Nonclassical, Leeds Contemporary Music Festival, Sziget Festival in Budapest and toured India.

Elischa Kaminer is a recipient of the 2017 Francis Chagrin Award.  SONG/ Jew Cactus Saxophone or reflections on the book of numbers is the second item of a series of short choreographies for two musicians, conceived during the first shower in Los Angeles, after staying in the desert. Joshua Tree's are slightly awkward looking creatures living in the desert in California, who can't quite decide whether they are palm trees, tree trees or humans.

Ivan Vukosavljevic was recently nominated for a Gaudeamus award. His delicate duo Ghost investigates the subtler possibilities of this unusual instrument combination in a world of flutters, tremolos and trills.

Freya Waley-Cohen won a 2017 Royal Philharmonic Composition Prize and is associate composer with Nonclassical and NightMusic at St. David’s Hall. Her playful Blu-Tack miniatures are full of twisting melodies and moments of calm beauty.