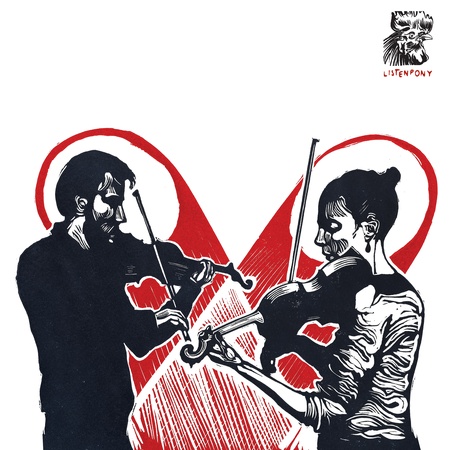 Mainly Two is formed of violinists Marie Schreer and John Garner, who came together to foster the creation of new work for two violins. Since forming the duet in 2014 they've built up a repertoire of over 20 new works written especially for them. Their fantastic premiere performances of Dani’s and Lawrence’s accompany excerpts from Prokofiev’s Sonata for Two Violins and Bartok’s 44 Duos for Two Violins.

Dani Howard studied at the Royal College of Music and won a Royal Philharmonic Composition Prize in 2015. Her piece, Symmetry, moves at breakneck speed, seamlessly shifting between the leading and accompanying roles of the duet and spinning out joyful, dancing melodies.

Lawrence Dunn is a current Sound and Music New Voices composer. His intimate duet your wits an E la takes the form takes the form of a long, drawn out glissando framed by the repetition of a short melody. It takes its name from the highest note in the medieval gamut: E la. The word ‘Ela’ came to mean a high-flown place, a place of great strain, a place perhaps above which nothing could quite reach.